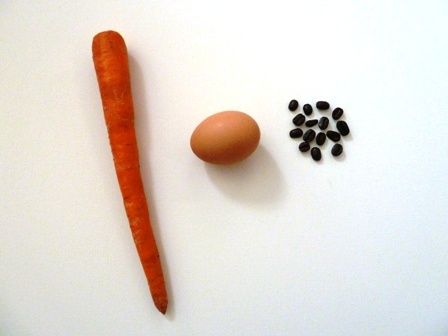 Are You a Carrot, an Egg or a Coffee Bean?

My friend, Jen, recently shared this story with me, “Are You a Carrot, an Egg, or a Coffee Bean?”  There is a wonderful metaphor about this story that I love.  Here’s my adaptation of it as it applies to love.

A woman was talking with her friend about her love life and how love never seemed to work out for her.  It seemed like every time she got her hopes up, she was let down.  She dated many men and only had a handful of short term relationships.  What she most wanted was to meet her soul mate.  Whenever things seemed to be going well, something would happen to derail her relationships.  She approached love cautiously and found herself wanting to give up on love.

Her friend took her to the kitchen.  She filled three pots with water. In the first, she placed carrots, in the second she placed eggs and the last she placed ground coffee beans. She let them sit and boil without saying a word.

Turning to the woman, she asked, "Tell me what you see?"  "Carrots, eggs, and coffee," she replied.  She brought her closer and asked her to feel the carrots. She did and noted that they were soft. She then asked her to take an egg and break it. After pulling off the shell, she observed the hard-boiled egg. Finally, she asked her to sip the coffee. The woman smiled, as she tasted its rich aroma.

The woman then asked, "What does this mean?"  Her friend explained that each of these objects had faced the same adversity—boiling water—but each reacted differently.

The carrot went in strong, hard and unrelenting. However after being subjected to the boiling water, it softened and became weak.

The egg had been fragile. Its thin outer shell had protected its liquid interior. But, after sitting through the boiling water, its inside became hardened.

The ground coffee beans were unique, however. After they were in the boiling water they had changed the water.

"Which are you?" she asked the women. "When adversity knocks on your door, how do you respond? Are you a carrot, an egg, or a coffee bean?"

Think of this: Which am I?

Am I the carrot that seems strong, but with pain and adversity, do I wilt and become soft and lose my strength?

Am I the egg that starts with a malleable heart, but changes with the heat? Did I have a fluid spirit, but after a breakup, a relationship not working out, or not having found love yet, have I become hardened and stiff? Does my shell look the same, but on the inside am I bitter and tough with a stiff spirit and a hardened heart?

Or am I like the coffee bean? The bean actually changes the hot water, the very circumstance that brings the pain. When the water gets hot, it releases the fragrance and flavor.

If you are like the bean, when things are at their worst, you become better and change the situation around you. When you feel discouraged and want to give up, how can you bring yourself back up to a higher level?

If you haven’t handled adversity in your love life the way you’d like to, it’s not too late.  The choice is yours.  How will you handle adversity moving forward, like the carrot, egg, or coffee bean?